The latest releases for 'Xestia Address Book' are listed below:

- UTF-8 support for contact data now implemented.
- Check if save was successful before closing the contact editor window if using the Save and Close Contact menu item.
- Fix issue of vCard 3.0 compatability. A value in either the title, forename, surname, other names and suffix text boxes in the contact editor is now required.
- Fix issue of not being able to connect properly via SSL due to recent curl (library used for communication between client/server) changes.
- Minimum version of curl required is now 7.54.1

- Fixed issue when main window is reset after creating an address book.
- Fixed issue after turning off the use background colour option which results in a black background.
- Clean up application icon for macOS version.

- Implemented single priority control for all contact editor subforms.
- Fixed issue with colour background still being displayed after disabling it in preferences.
- Fixed issue with right click on a contact in the contact list when the account type is local.
- Close all windows before opening the preferences window.
- Fixed issue where modifying or deleting items from the Contact Editor will cause XAB to crash if there's no items in the list.
- Fixed separate issue where deleting a note from the Home tab in the Contact Editor will cause XAB to crash.

- Added option to change the background colour of contact data when being viewed.
- Updated Xcode project for macOS.

- Fixed issue with audio device remaining open after opening the contact editor for the first time.
- Fixed issue where prefix isn't detected on Linux systems when editing an account.
- Quit application process properly implemented.
- Enhanced contact information screen properly formatting dates.
- Contact Editor subforms that use the language drop down box are now pre-filled with the list of language codes from ISO 639-1.
- Added icons to the preferences window.
- Double clicking on an account in the preferences window opens up the properties for that account.

- Added toolbar to the main window with icons.
- Created the template translation file. This now allows Xestia Address Book to be translated into other languages.

- Unsupported accounts (neither local or CardDAV) are now displayed within XAB. Contact data from unsupported accounts can be viewed but not edited or deleted. Account settings cannot be edited but the account can still be deleted.
- Implemented Online/Offline feature. It can be used by double clicking on the cable icon next to the SSL icon in the status bar or by selecting Sleep Mode in the Activity Manager menu.
- Documentation changed to a flat OpenDocument text file for easier management for the code repository.
- Moved contact saving in frmContactEditor to the ContactDataObject class.
- Unit testing added for Contact Saving in the ContactDataObject class.
- Fixed random number generation for directory naming when creating accounts.

- Added support for Windows. Support begins from Windows 7. Use of XAB on Windows Vista or before this version is unsupported.
- Added Visual Studio 2013 (Express) project files.
- Added Xcode project files.
- SSL verification is now done before sending or receiving any contact data so that SSL context handles in Windows and OS X can be obtained. Linux versions use certificate information from cURL's CURLINFO_CERTINFO.
- Fixed code in frmActivityMgr so that proper cURL codes are used instead of being lazy with integers that may change.
- Fixed issue where saving picture data in some cases may cause XAB to crash.

- Added check to see if a server is on the blacklist and to display a dialog confirming that data loss could happen if that server is used.
- Added support for OS X. Support begins from OS X 10.11.4. Use of XAB on OS X before this version is unsupported.
- The Xcode project used to build XAB in OS X will appear in the next version of XAB (0.13)

- This version is a maintenance release.
- All code is indented using tabs not spaces.
- Remove most of the unused variables from the code.
- Moved unit testing application building into a separate Makefile. To build the unit test application, run make from the tests directory.
- Added unit tests for some of the common functions that can return values or use pointers.

- Implemented support to run the application to display contact information only using the -d switch.
- It takes one option which is the filename of the contact to display.
- Fixed issue where address book URL does not appear when server is using self-signed SSL certificate.
- Fixed issue where the conflict resolution window kept coming up when a contact was saved to a CardDAV server.

- Password was displayed as text in the Edit Account window when it shouldn't have been.
- Fixed top section of the contact information page so that the name doesn't collapse into a line per word.
- Display error message if no accounts are selected when searching for contacts.
- Resized the Edit Account window so that all controls appear properly in the window.
- Fixed issue with the add and remove search setting buttons in the Search window after searching.
- Fixed issue with accounts that are reloaded after closing the edit account window without making any changes. Clicking on either the Edit or Delete buttons without selecting an account again caused XAB to crash/assert.
- Fixed issue where SSL certificate window asserts due to MaxLength being set for one of the controls.

- Fixed issue with checks not being made on iterators when editing data which causes the application to crash.
- Fixed issue which causes the application to assert on multiline text box controls (maxlength was set when it shouldn't have been).
- Resized add and edit properties dialogs that are use with the contact editor so certain controls are not squashed.
- Contact editor now has a minimum window size of 800x500 set.
- Corrected Makefile so that compiling with -j now works.

- Fixed right click menu in the Search window when the mode is Search Only.
- New accounts now appear after creating an account through the new account
window. They didn't appear before due to a bug involving a boolean that
wasn't set as a pointer.
- Added support to do contact format conversion on the command line using the
-c switch.
- Takes three or four command switches:
-ifmt=<str>: Input format to convert form.
-ofmt=<str>: Output format to convert to.
-ifile: Input filename to read from.
-ofile: Output filename to write to. (don't use to pipe to console).
- Added unit tests for contact format conversion.
- Added unit tests for loading vCard 4 data.
- Moved loading of vCard 4 data when using frmContactEditor into
ContactDataObject. Saving will also move into ContactDataObject in a later
version.
- vCard 3/4 conversion now supports CLIENTPIDMAP, XML and SOURCE.

- Added right click menus for the contact list in the main window and the search results list in the search window.
- Added feature to save photos, logos and sounds from contacts.
- Fixed minor vCard version printing to console issue.
- Added copyright and licence headers to the source and header files as needed.
- Changed CardDAV into CardDAV* for the Activity Manager tasks which improves memory efficiency as CardDAV object is now deleted each time a task is completed.
- Splitted some source files down to make them more manageable.

- Click on the Close Window button on the main window on Win32 systems causes XAB to crash. This hopefully has now been fixed.
- All tabbed forms now show the first page instead of the second page in some forms.
- Initial unit testing application has been implemented. Additional unit tests will be added over time.

- Added -e support for direct editing without having to start XAB fully. The direct editing process checks if the contact is in the user's settings/accounts directory and refuses to load it if it is. Another check is made where if the file is not a vCard 4.0 contact, it will refuse to load.
- Cleaned up Bitmap Code Helper removing all commented out references to Boost and fixed the line tabbing.
- Cancel button for the Preferences window now works.

- Fixed assert issues when opening frmContactEditorTemplate and frmContactEditorAddress
- Save Contact & Close within the contact editor is now implemented.
- Fixed more issues with compiling when using other Linux-based OSes other than OpenSuSE.
- Fixed issues when creating an account on a Win32 system.

- Added -s support for direct searching without having to start XAB fully.
- Fixed issues with compiling when using other Linux-based OSes other than OpenSuSE.

This release is the first version of Xestia Address Book. 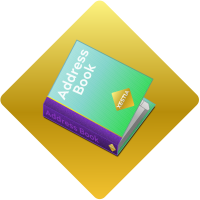